Preface: Shellshock and its Treatment at the start of the First World War

When the Great War broke out in August 1914, William Rivers was in Australia, attending a conference in his capacity as anthropologist/ ethnologist and could not return to England until March the next year. By that time, several cases of what was to become known as ‘Shellshock’ had already manifested amongst the regular army and territorials who had borne the bulk of the fighting. Despite the fact that the effect of battle trauma upon soldiers had been documented during the American Civil War, referred to by Shakespeare in his historic plays and mentioned in Ancient Greek battle accounts many claimed it was an entirely new phenomenon. The British Government and military authorities had made no contingency plans and were apparently taken aback when their troops began to suffer. Unable to deal with the ‘outbreak’ by traditional means and somewhat mystified as to what measures to take, responsibility was handed over to almost any medical professional that could offer a solution.

‘Shellshock’ is actually a misnomer for a condition that derives from a person being repeatedly placed under some kind of stress during a (combat) situation (Rivers, ‘The Repression of War Experience’, 1917) or suffering a sudden massive shock that their mind cannot deal with. It was not caused by exposure to shell detonation nor was it, as often purported at the time, an illness that only weak or predisposed people are susceptible to. In fact, because one of the major factors in its development can be the ‘bottling up’ of emotion, it is often the stronger minded that eventually succumb. In these cases, the mind is continually being battered by inner conflict or distress until it cannot endure anymore and the person suffers some kind of ‘breakdown’. Symptoms can vary greatly – mild affectations could be shaking hands or stomach upset, more advanced signs are almost infinite; involuntary paralysis of a limb or limbs, incontinence, flashbacks, nightmares, and depression are only a few of the possibilities. When historian Lyn MacDonald was researching troops’ stories for her books on various aspects of the war in 1980, she found that there were still a thousand of men receiving compensation for trauma caused by their service, and that over a hundred were in mental hospitals having never regained their memories. They, to put it simply had not recalled any identification details since whatever event had taken the last shred of their mind’s ability to endure all those years ago.
It is a moving and sickening thought – made more so when one considers how they and many of their comrades were treated.

Medical authorities of all combatant nations of 1914 seem to have been surprised by the scale on which cases of shellshock multiplied. Some coped better than others but it appears that the British often fared worse than her fellows. There are two possible reasons for this, both of which seem at first unrelated to the issue: class structure and Victorian strictures on behaviour. Class structure is the simplest to explain: the ordinary man was used to hard work and having to carry on whether he felt ill or not, merely to support his family. He would not normally be excused by an employer or society unless his symptoms were physical and very severe. If he could not earn money for food, clothing, and accommodation, it was seen as shameful, neglect of his duty and, worst of all, likely to lead to spending time in the Workhouse. There was no unemployment or sickness benefit from the government and any help the person’s parish might afford was strictly limited. He was very much expected not to complain about his lot so he was used to bottling up his fears and resentments whilst the higher classes were allowed more say, and, unfortunately, in the Great War, this made the working man susceptible to stress-related trauma. His symptoms were likely to be more severe for the same reasons; he would become mute than to stammer – and similarly, where-as the condition might cause an officer’s hands to shake, they would be paralysed in his lower-ranked compatriot. His symptoms needed to show.

The officer classes did not escape the condition. In Britain, a version of the old medieval feudal system was still in play and it was deeply ingrained into many sons from the traditional families that they were responsible for the people they employed; in war, this naturally translated to the troops that served under their command. Doctors treating traumatised officers saw that the majority became ill due to the pressure of trying to keep their men safe and guilt when large numbers of them were killed or badly wounded.

Victorian notions of correct behaviour are much more complex to explain and often contradictory. The main issue that affected men of all ranks was the notion that British males should not show any kind of negative emotion and must be completely in control of his reactions at all times. Difficult as it may be these days to imagine that a person presented with possible death or painful injury on a daily level – or seeing a friend or brother’s body lying out, rotting in No Man’s Land for days – or even months (a battalion of a Scots regiment was forced to leave several or its dead on the field around Beaumont Hamel on the first day of the Somme in July 1916, and found the skeletons still in place, lived in by the rats who had eaten the flesh, when they returned in November) , should not respond outwardly in fear or sorrow, that was what England Expected **

This was reinforced by the concept of Empire and all it entailed. Britain at the end of the 19th century ‘owned’ a third of the world and was continually having its ‘rights’ to territory threatened by either the original inhabitants or other countries who wished to take over. The government felt it could not afford for its citizens to look weak in any way and thus promoted the behavioural ideals set by society. The mere thought that men in its army could breakdown was, in their view, both a disgrace and more significantly, a point that might be exploited by enemies. It was reluctant to treat anyone who dared break this unwritten rule as anything short of criminal.

Just as with men who were unable to carry out their duty of work due to non-physical illness, the suggestion began to emerge that shell-shocked soldiers were lazy, shirkers or, because their symptoms prevented their taking part in battle even cowards. Treatment was not always a made available and an unlucky number were executed by firing squad, others, with mild symptoms were ‘rested’ close to the battle-lines whilst the ‘lucky’ were sent back to England. There they could encounter anything from electric shock to analysis of their dreams in an effort to cure them so that they might return to duty. Most treatments were somewhat brutal or lacking in empathy such as the measures taken by a doctor at the famous Craiglockhart Hospital for Officers; the man would find out what was most likely to trigger an attack of anxiety or distress in each man then subject him to it. If he was disturbed by noise at night, he would be placed with a person who snored or was very active at night; if his eyes were made uncomfortable by light, his room curtain would be removed and he would be ‘encouraged’ to face the window whenever possible. Ordinary men, in general were met worse treatment that their officers but all too often, neither received the care he needed.
.

Thus was the situation in 1915 when Rivers arrived home. He was determined to do something for the war effort and considered his options; since he was medically qualified, the logical answer was to become a member of the RAMC. To his dismay, he was designated unfit for duty at the Front but discovered the government appeal for doctors to work with soldiers psychologically damaged by their war service. Trained in neurology, physiology, and psychology, Rivers was just the man for the job and he immediately began helping L E Shore with patients at the First Eastern General Hospital in Cambridge whilst waiting for a formal post.

His first appointment was at Maghull hospital in Liverpool, a ‘centre of excellence’ (Henry Head, Lancet, 1918) whose patients were all men of ordinary rank. To all intents and purposes, Rivers found it very suitable as there was already something of a humane approach to the men’s’ illness in place. Doctors, for instance, analysed the men’s dreams in a bid to understand any underlying causes to their condition and tried to discuss their problems with them, rather than telling them how they should behave or demanding obedience. It was here that Rivers’ Talking Cure, a method still used in treatment of trauma illness, began to emerge. His own experiences taught him that he needed to get to know each of his patients as individuals, and treat them as such, because since each man’s experience would be unique, so his ‘cure’ should be. 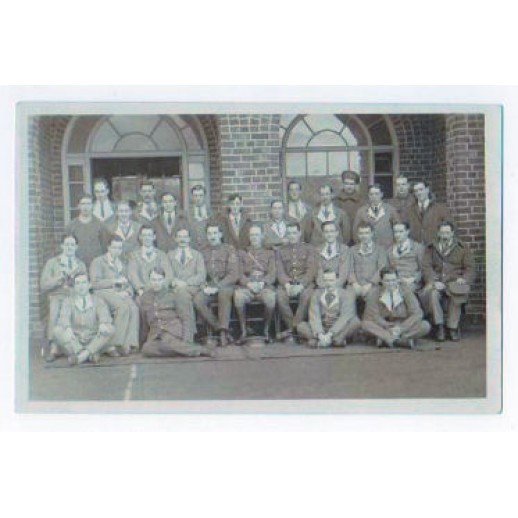 Patients out side the hospital at Moss Side, Maghull, WW1

Sadly, the doctors at Maghull found their approach had only limited success largely because their patients’ backgrounds tended to make them wary of anyone in authority, doctors in particular. Many men, unused to such sympathetic responses to their plight and to non-physical illness, suspected all the questions were actually tests to decide if they were insane and to be put in an asylum, or sane and therefore to be sent straight back to their unit or falsely accused of being cowards. They were not used to having their thoughts or feelings genuinely taken into consideration – and that equally, made it more difficult for the medical men to do anything more than attend to their symptoms rather than the cause. Rivers was frustrated at not being able to help them as much as they needed, because he knew that, left untreated, the cause would fester and their illness would probably return as soon as they were exposed to the war again. The medics were still trying to work out a solution to this problem when the news came that Rivers was to be transferred to a hospital in Edinburgh, Scotland. 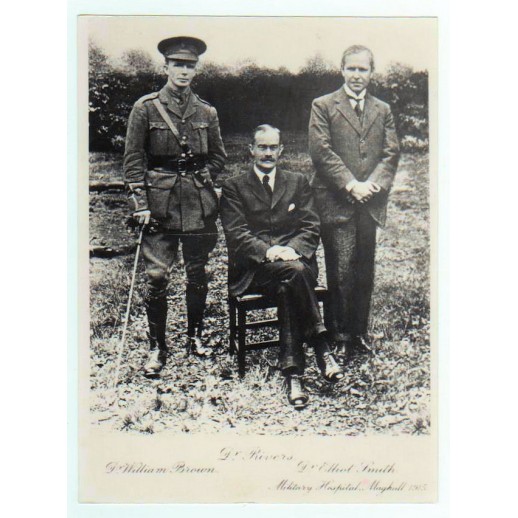 * Rivers to L E Shore, 1919, in reference to his work with traumatised soldiers
** ‘England Expects Everyman to do His Duty’ was a signal sent out to all British ships by Admiral Nelson during the Battle of Trafalgar, 1805